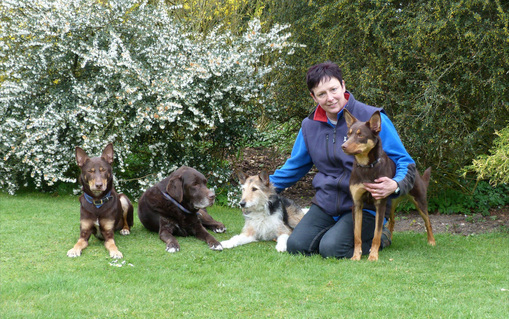 My dogs have all been very different  which has taught me a lot about dog training. From experience I have found that using methods of training which are fun for both the dog and handler are the most effective regardless of age (of dog or handler!).

I set up my own club, “A To Zooom” in 2008 . I had been fortunate enough to gain valuable experience by training and instructing with two local clubs, Aylesbury CTS and Fracas.  I still have close links with both clubs and continue to instruct for Aylesbury CTS' obedience section.

I qualified as an  Agility Club Approved Instructor some 14  years ago, and have competed, both in Obedience and in Agility for over 15 years.

During that time my lovely Fitz, (a chocolate Labrador who I lost on 23 January 2013 at the age of 13),  clocked up clear rounds in Open Agility Competition and represented Aylesbury CTS in their local Obedience league club matches and even won a few classes.  But his biggest claim to fame was going to Crufts in 2001 as part of Aylesbury's KC Bronze Good Citizen team where he had a lovely time and thoroughly enjoyed meeting all the people!  However he duly decided to retire himself from both obedience and agility to concentrate on a new position of "Official Travelling Companion”.

Molson then eagerly took up the challenge of competition team leader! Molson qualified for numerous national and international agility finals including the Novice Olympia Pairs finals at The Horse of the Year Show.  The Arden Grange Starters Final (which he won), and The Agility Club Starters Challenge (where he was runner up). He has also had a successful obedience career and he was the highest placed "ABC" at CRUFTS 2009 in the KC Special Pre-Beginner Obedience Stakes and he returned to CRUFTS 2010 as part of the Southern Team in the Inter-regional Obedience Competition where he won both his class and helped to ensure that the team won the competition overall. In 2010 and 2011 he qualified for CRUFTS YKC jumping and agility with his Junior handler, Scott.

Molson also performed as a model and canine actor, he’s best known for his starring role in  BBC TV CBeebies' Tommy Zoom and his "celebrity status" was quickly noticed and he became a Canine Celebrity Ambassador for Fish4dogs!

He has featured in the 2011 PDSA adverts and information leaflets and was starred in the July 2011 edition of Your Dog Magazine, where he demonstrated some of his skills in an article describing how to train your dog to do tricks. As a result of his fame he has visited local schools and entertained children (and adults) at his vets', Wendover Heights VC, open day in  2012 and 2013.

Mo has wound down his competitive activities and now enjoys "helping" me with my puppy and fun obedience classes .....although he does seem to be concentrating his efforts more on growing old disgracefully!!!

Rafe is a completely different character to Molson. He came from Dogs Trust in Wales at 13 weeks old and very much proves that all dog and handler relationships are completely different but with the right training and patience, dogs can succeed.  Rafe is a complex chap but is a real sweetie and he definitely has his own fan club (who constantly remind me that they would love to have him - no chance!!)

Rafe reached the Novice Final at Dogs in Need two years running and has clocked up a number of top ten places in agility and has also entered the obedience show ring! He grew in confidence and became much more positive in his work. Rafe won out of Grade 3 in Agility in May 2012 and in to Grade 5 in September 2014! He also qualified for the YKC ABC Agility at Crufts with his "young" handler, Scott in 2015. Rafe retired down to "anysize" classes in agility last year and is having lots of fun! Rafe only ever did "training rounds" in obedience but  last year started treibball which he is thoroughly enjoying!!

My next youngest dog is Khali and she’s a huge challenge!  Partly because she is from a line of tough working dogs and consequently her natural herding instincts are very strong!  She is also very opinionated about everything and expresses that opinion at the top of her voice!  There are only two speeds; flat out or full on.  I started her socialising and basic training  when she was 8 weeks old and she is continuing to work on her formal obedience exercises.  Khali's strong herding instincts meant that I held off putting her in the agility ring initially although she was showing great potential in training  - as long as there were no distractions (usually in the form of moving dogs!!) She is now focused "on the job" in the ring and qualified for the DINAS Novice final 2013,  went Grade 4 at Letchworth 2013, Grade 5 at Devon Dogs in August 2014 and won her first Grade 5 agility at Letchworth in 2015. Khali has now won into Grade 6 and has got 1 win towards Grade 7.

In December last year I got my new puppy, Nate.  He is another Australian Working Kelpie who is actually Khali's cousin!!  It is very early days with him and we are concentrating on having fun and trying to learn manners!!