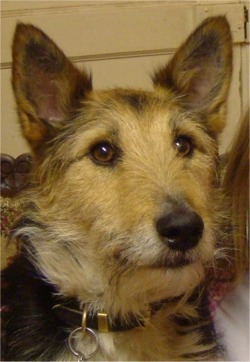 Molson’s most significant success to date, is in his role as Daniel in BBC’s children’s drama, Tommy Zoom. Click here for a picture of Molson (Daniel) with his human co-star... Molson loves to play to the camera and has a vast repertoire of acts, including some well-trained tricks which still leave him scope for improvisation.

His favoured tricks include “sad” poses, skateboarding, retrieving varied and difficult objects, rubbing his eyes, barking, waving and generally acting out the “script”. He is patient, good tempered and able to maintain required scenes for prolonged periods without handler intervention.

Molson’s other “side-line” is his agility career where he is successfully competing at a high level, having competed in various “finals” and qualifying to compete at Olympia in 2007.  He started training at Aylesbury CTS and is now training with his Junior handler, Scott, at A-to-Zooom.

Molson is available for further film/advertising roles and can be trained specifically to a script.

In addition, Molson is considering sponsorship offers so if you are interested in finding out how to sponsor Molson and have your business promoted amongst the growing agility community, please contact Molson’s Assistant/secretary, Ann Dormer. 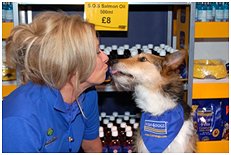 Molson on the Fish4Dogs stand at Crufts 2010!  I'm sure Jill really wanted a fishy kiss!!! 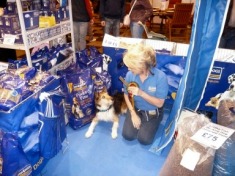 Molson came 5th in the Special Good Citizen Pre-Beginner class and was the highest placed ABC (Anything but Collie).

We also had a ball on the Fish4Dogs stand, promoting some fabulous products!

Molson is pleased to announce his continued association with Fish4dogs in 2010.

Molson is pleased to announce his continued association with Fish4dogs in 2011.